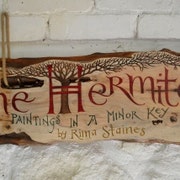 Paintings in a minor key

thehermitage is taking a short break

Note from shop owner Dear folk who have come here to buy my wares - you can now find them over here: https://shop.hedgespoken.org/collections/rima-staines - please join me there in the Hedgespoken emporium!
With warmest wishes from Dartmoor
Rima

Dear folk who have come here to buy my wares - you can now find them over here: https://shop.hedgespoken.org/collections/rima-staines - please join me there in the Hedgespoken emporium!
With warmest wishes from Dartmoor
Rima

The Hermitage - Paintings in a Minor Key

Rima Staines is an artist using paint, wood, word, music, animation, clock-making, puppetry and story to attempt to build a gate through the hedge between the worlds.

Rima’s inspirations include the world and language of folktale; peasant and nomadic living; the art and music of Old Europe; magics of every feather; wilderness, plant-lore; the margins of thought, community and spirituality; and the beauty there is to be found in otherness.

Rima's artwork has appeared in and on books, magazines, and record covers on both sides of the Atlantic. She maintains a passionately-followed blog at http://intothehermitage.blogspot.com and has sold paintings and prints of her work (as well as the clocks she makes) on her travels the length and breadth of Britain. A former accordionista with the London Gypsy Orchestra, she can now be found playing by Devon’s street corners and campfires. She has books in the making, and also produces animations and puppets and obscure games in lost dialects.

Rima lives on the wild edge of Dartmoor, working from a studio at the top of a ladder beyond a trapdoor, where she keeps her wonder-cauldron simmering.

Last updated on April 29, 2022
Thank you for taking the time to appreciate my work. I am a full time artist living in rural Devon, UK, and supporting myself through sales of my work.

I accept payment via paypal or direct checkout at point of purchase.

I parcel and package all prints in waterproof wrapping and stiffened envelopes, and send originals and giclée prints tracked with postal insurance. The postage prices here directly reflect the Royal Mail rates, apologies that they are not cheap.

I will send the order to the address on your etsy account, so please make sure this is correct.

Please bear in mind that I am running this shop on my own alongside my studio work, so responses and delivery times will reflect that.

It should go without saying, but these images are copyright of Rima Staines and cannot be reproduced in any form. Please respect my creative domain.

I'm open to any additional questions or requests you might have, and hope that you are as happy with your purchases as have been the many many people who have supported me over the past years :)