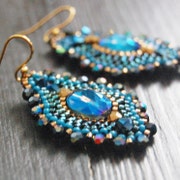 ThreeFiveEightyFive is taking a short break

Note from shop owner We are currently away!

We are currently away!

Three 5 Eighty 5 began in 2006 while on Spring Break in New York City. We ran across an issue of Lucky Magazine- Feb 2006, that featured thread earrings. Then we found some vendors on the streets of Soho that sold them (very rare). My cousin bought us a pair and after examining them she said, " you guys are so crafty, I bet ya'll could make these". We accepted her challenge when we returned to Atlanta. Thread earrings were "new" at the time and we wanted to jump in on the action. We said a simple prayer, hit up our local craft stores and God answered our prayer! Within one week we had $300.00 worth of sales from our friends on campus, then I ran across Etsy.com and the rest is history. 10 years later, we're still here - now featuring beaded earrings!

If you are unhappy with your purchase, please contact us and we will refund you the total cost less s/h, upon return receipt of purchased item.

If you prefer to pay via check or moneyorder, we will process and mail your order after funds are received and cleared.

We ship on MONDAYS and WEDNESDAYS. For orders of 3 or more pairs, we will contact you of your shipping date.

Our standard shipping is USPS 1st class (3-7 business days).
You can upgrade to USPS Priority (2-3 days) if requested.

*If you need your order by a definite date, please order ahead of time or request that your shipping be upgraded.