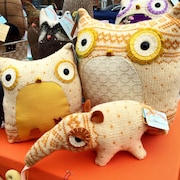 tigerflight is taking a short break

I have an unhealthy compulsion to create stuff.
One day after felting a sweater, I was tossing stuff together on my bed to make a bag, and the way a sweater and a piece of fabric landed together looked like an owl so I made an owl instead. At the time, I was making funny little felt monsters which had a funny story to go with them but no one reads stories. Plus people kept comparing them to Ugly Dolls which is fine, but it bummed me out.
Anyway, the owls I made from that pile were a big hit so i said "huh....maybe there's something there?" and I made more. Plus some squirrels. And whales. And cats.
Now I have a whole menagerie of animal pillows that range from giant squids to anteaters slurping up ants.
I started making my 3-d animals by cutting out pieces of newspaper and hand sewing it to see where different pieces would have to go to create the look of the animal. The result is a slightly folk-art, handmade look that I wouldn't trade for anything.
Every piece I create is one of a kind- using such limited sourced material guarantees that and plus, I would get bored having to make the same thing over and over.

I am happy to make custom orders- whether it's from a sweater from a beloved friend or family member or a critter that resembles one of your four-legged family members!

How do I wash these?

All tigerflight pillows are made by hand. The bulk of the pillow is sewn on a machine, but the eyes are hand-embroidered and beaks and feet are hand-sewn on, so we recommend hand/spot washing. I think you could maybe put the pillow in a pillowcase or lingerie bag and machine wash on a very gentle, cold cycle. The wildcard is that I use a lot of upholstery fabrics and as such, they're not really meant to be washed in a machine.