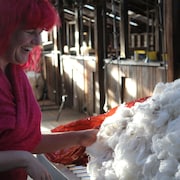 TONOFWOOL is taking a short break

Note from shop owner We're on leave to do our final listing which will happen at our other store: http://msgusset.etsy.com - sign up and you'll be the first to know when we're back: http://eepurl.com/bpF8P9
cheers,
-kylie 🐏🐏🐏

We're on leave to do our final listing which will happen at our other store: http://msgusset.etsy.com - sign up and you'll be the first to know when we're back: http://eepurl.com/bpF8P9
cheers,
-kylie 🐏🐏🐏

TONOFWOOL started as a project in 2011, when Kylie was running a small business as a yarn dyer (http://msgusset.etsy.com) whilst studying textiles at RMIT. What shocked her is how the bulk of wool used in the textile industry in Australia was exported for processing - it's close to impossible to find a yarn which hasn't left the country. With much research and the support of a successful crowdfund (http://wool.pozible.com), the first ton of rare breed Cormo wool from the founders of the breed in Tasmania was processed.

BUSINESS AS UNUSUAL:
Breeds of sheep other than Merino in Australia aren't widely known. Thanks to a growing trend in knowing the origins of consumer purchases, crafters are becoming more educated. We wanted to both support and promote Cormo as a great wool to work with, which is grown sustainably, and supports genetic diversity. TONOFWOOL is the first time that Cormo from the founding family has been produced as a commercial product for the domestic knitting and crafting market.

Sustainability:
All wool for the project is being sourced from the Downie farm in Tasmania, which stocks sheep at a lower number than conventional farms, encourages clean native pasture, increased sheep nutrition and excellent soil health. Fly strike is less of an issue on the farm due to low temperatures, so mulesing isn't as common - the fleeces selected for TONOFWOOL are from non mulesed sheep.
TONOFWOOL is produced as locally as possible - with scouring (cleaning) in Australia, processing and spinning in New Zealand, storage and distribution from Melbourne, Victoria, Australia. Around 80% of Australian wool is processed in China, so TONOFWOOL is our small dent in that statistic, improving carbon footprint.

Social Responsibility:
We take every care to ensure that everyone within the supply chain is paid fairly. We pay well above the market price for wool, acknowledging the work and story behind the "Dungrove" farm.

TONOFWOOL is founded by kylie gusset, who also runs the etsy store msgusset:
http://msgusset.etsy.com - a source of hand dyed yarns and fibres, including cormo top and smaller quantities of cormo yarns.

We want you to be happy with your order, and we will do whatever we can to work with you to sort out any issues!
We cannot accept responsibility for repaying postage and handling charges unless we’ve made an error with your order.

Payment is accepted through PayPal + Etsy Direct Checkout (which allows you to use your debit or credit card, and Etsy gift vouchers).
Need help completing your order? Please read this -https://www.etsy.com/au/help/article/339?ref=help_search_result

Orders will be shipped to your Etsy address - please ensure it is up to date :)
Orders are shipped within 3-5 days of purchase. Shipping occurs on Tuesdays and Fridays.

Australia Post provides tracking with all domestic orders. Overseas orders are shipped standard without tracking or registration unless requested, or at our discretion.

International Customers Please Note - we are shipping from Australia. Packages to the rest of the world may take up to 2-3 weeks to arrive - though packages to the US usually arrive within the week.

If your package does not turn up within the expected timeframe, please contact us and we will do our best to rectify the situation.

TONOFWOOL cannot accept responsibility for any customs issues or refusals. If you are concerned about your country's customs laws, please investigate before purchase. If a package comes back to us from customs in the original condition, we will provide you with a full refund.
What we've found: USA, Canada + NZ, we've had no issues whatsoever. However, customs charges into the UK do occur, and it's a case of buyer beware.

TONOFWOOL yarn is in skeins. We encourage yarn buyers to wind their own skeins as it's part of the crafting process and gives you a greater knowledge of what you're working with. We don't offer a winding service, but we do heartily endorse and covet the following tools: http://www.pinterest.com/tonofwool/yarn-winding-tools/