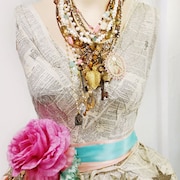 I have been hand making jewelry since about 1992. I live in Arizona, so I was exposed to gem and mineral shows (the greatest gem shows take place in Tucson) at an early age.

Growing up in middle of the nowhere Arizona places, by mining towns, only fueled my imagination and love of rocks and stones.

There were actually several mines on our property, which peaked my fascination with sparkly treasures. I had big dreams about outrageous loot discoveries.

I seem to have an inherent need of the hunt for buried treasure, which leads me on day long expeditions to find exquisite bits and bobs to add to my pieces.

Not to mention trips to gem shows to bring home suitcases of beads and stones from all over the world.

After a decade of jewelry shows and private trunk shows, along with folks asking - I plunged and decided to share my jewelry online. November 2012.

Jewelry is always an exciting adventure <3

Last updated on June 5, 2013
Thank you for taking a moment to carefully read my shop policies.

My greatest desire is for you to love your purchased treasures. Please take a moment to read my shop policies before you make a purchase.

Please contact me if you have any questions. I am easy to work with.

To contact me, send me an Etsy Convo or e-mail me at :
VanessaValencia [!at] aol.com

I will always ship to your Etsy address, please make sure it is correct.

I make huge efforts to ensure that you receive a quality item, free of any defects. However, Please contact me immediately if you have a problem with your order and I'll do my very best to address the issue.

Keep in mind that jewelry stones have inclusions inside the stones, and they are not man made items. There will ba variations in colors, shades and sizes of stones and there will be patinas on some metals. This is a desired quality, not a defect.

I do not offer refunds or exchanges, unless there is a viable significant issue with your product. I am sorry, but I can not be responsible for defects that occur during shipping. (I make sure to package items incredibly well)

There are no refunds or exchanges for buyer's remorse. A purchase is a binding contract, so please shop carefully and responsibly.

If there is a defect issue (which I work hard to ensure does not occur prior to shipping) with your order, and we resolve to offer you a refund, you will not be refunded shipping costs.

Your refund will only go into effect after you have shipped the item back to me, and it arrives in the same condition you received it in.

I will ship orders between 1-3 business days.

(During the holiday season late November - Late December, I ship parcels every 24 hours)

I am very easy to work with so please, don't hesitate contacting me with questions. Although my shop Policies seem a bit strict, they are necessary to running such a business. Thanks for understanding.

If you have any questions or concerns about your order, please contact me via Etsy Convo or E-mail (vanessavalencia@aol.com).