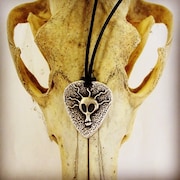 voodookingdesigns is taking a short break

Carving in wax Scott made many many figures and parts of figures...they end up in draws, in piles on the coffee table and stashed away in cigar boxes (until the cigar boxes became guitars and that is another story).

Jerri played in clay, making messes and delighting in the cool soft forms.

Then the real fun began - pulling creepy Voodoo carvings out of hidden places, infusing them with love and late night laughter. Melting silver, Oxidizing in satin finishes, blackening edges and touching them until they breath.

Now -- Shiny bones, scowling Tiki faces and hearts in various stages of repair or ruin. A partnership of epic and every day boring chores put good Voodoo intent and happily ever after in any realm online to share with others.