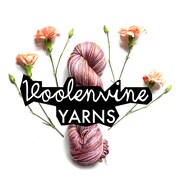 Kristin Lehrer is the founder and passionate hand-dyer behind Voolenvine Yarns. A native New Yorker, she lives in Brooklyn with her husband and their cat.

She discovered knitting at the age of six, while visiting her Great Grandmother in Germany — who was ALWAYS knitting! But it wouldn’t be until high school that Kristin taught herself to knit from books and became very addicted to the craft.

Unfortunately, knitting took a back seat during college and would continue to for some time.

In 2007, Kristin was laid-off from work and suddenly found herself with lots of downtime between job hunting. It was then that she finally re-discovered her knitting needles and … Ravelry! She hasn’t stopped knitting since.

During this time, she was also inspired by other knitting blogs and podcasts to start one of her own. YarnGasm is Kristin’s weekly video podcast about knitting, spinning, and her fiber-filled adventures. Check it out!

In 2014, Kristin thought it might be fun to try dyeing her own yarn and instantly fell in love with the process. Soon the skeins started piling-up, and knew she couldn’t knit them all by herself. So, she opened an Etsy shop and Voolenvine Yarns was born! To her surprise, people enjoyed her hand-dyed yarns and came back for more.

A year later, Kristin decided to leave her job as an online video editor / producer to pursue her true passion as a fiber artist!

Professional acid dyes and citric acid are used to dye our luxury yarn bases. While most colorways are repeatable, you will find many one-of-a-kind skeins as well.

I want you to be happy with your yarn! If you are not completely satisfied with your order, please do not hesitate to contact me. I am happy to address any questions or concerns.

Refunds and exchanges will be handled depending upon the nature of the issue. Return shipping costs may apply.

Incorrect items and/or missing items from your order will be shipped/exchanged at no extra cost.

Return items must be shipped back to me in condition they were received. Refunds will not be issued to items returned if they appear used, damaged, and/or soiled.

All discounted items are final sale.

I accept payment via credit card and/or PayPal.

Need an item fast? Contact me via Etsy to discuss speedier shipping options.

New York State residences will have a 4% sales tax added to their order during checkout.

*** INTERNATIONAL CUSTOMERS PLEASE READ ***
Customer is responsible for payment of any international customs fees and/charges that may apply. If you are purchasing from outside the US, please double-check with your post office website regarding customs policies.

DYE ENVIRONMENT:
All yarn is hand-dyed in my kitchen, using professional acid dyes in a cat-friendly, smoke-free environment. While my kitty is not allowed near yarn for sale, if you have a cat allergy, I cannot guarantee yarn is 100% dander-free.

COLORS STAY PUT:
All yarn is color-fast guaranteed. Skeins are pre-soaked with citric acid, and then added to a dye-bath with another dose of citric acid. After dyeing, skeins are rinsed in lukewarm water with a natural, gentle, lavender-scented dish detergent.

While my superwash yarn is 100% machine-washable, I highly recommend hand-washing the first time around, using a gentle dish detergent to remove any excess dye. The next time, machine-wash away!

For non-washable fibers, ::always:: hand-wash and lay flat to dry.

HAND-DYED YARN IS A WORK OF ART:
As with all hand-dyed yarn, skeins of the same colorway are never exactly the same. While I use the same dye formula and technique to achieve a specific colorway, shades and color placement on the yarn will vary from skein to skein.

WHY NO DYE LOT NUMBERS?
Because I dye colorways in small batches, I do not assign my yarn dye lot numbers.

When ordering multiple skeins of a particular colorway, I will make sure the skeins I send to you do match.

Generally, I only dye about 4 of the same colorway at a time. If you need (for example) a sweater's quantity of yarn, please contact me via Etsy to let me know, and I will make sure your yarn is dyed to match.

OOAK COLORWAYS:
Sometimes colorways don't dye up as expected, or I was just having fun, experimenting with different colors and techniques. The colorway is most likely non-repeatable but still perfect for knitting.

MISFIT COLORWAYS:
Colorways are variations of repeatable colorways. Sometimes they turn out too light, too dark, or something completely unexpected happened in the dye-pot. Still beautiful, knit-able yarn, nevertheless!

CUSTOM ORDERS:
I do not offer custom colorway orders. However, if you would like to purchase multiple skeins of a particular colorway that I've already dyed (NOT including OOAK, MISFIT, and LIMITED BATCH) I'm happy to dye orders of 2 skeins or more.

I process custom orders via PayPal. If you would like to request a custom order, please provide the following information:

• Which colorway?
• How many skeins? (2 skein minimum)
• Your email address
• Your shipping address

I will send you an invoice via PayPal and dye upon payment.

I am happy to reserve items (excluding pre-orders and clubs) up to 7 days. Please contact me via Etsy, letting me know which item(s) you would like set aside and I will create a reserved listing for you. If you do not purchase your reserved item(s) within 7 days, your items will be made available to general customers.

WHOLESALE:
Voolenvine Yarns is not accepting wholesale orders at this time.

PHOTOS:
Some monitor displays may vary, but all photos are taken using professional camera and lighting equipment. Some photos may be lightly color-corrected to display each skein's truest colors and shades.

Did I forget something? Contact me with your questions.