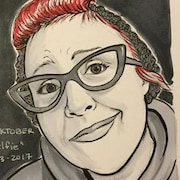 Announcement    It's time. I'm brushing off the dust and making some major changes. WaywardClay is now Wynne C Blue Art.

It's time. I'm brushing off the dust and making some major changes. WaywardClay is now Wynne C Blue Art.

I am an artist, sculptor, designer, writer and musician based just outside of Seattle, Washington. I do a lot of different creative things, but when it comes to creating a lot of amazing things to sustain a shop I was stuck. I couldn't focus on one thing.

It started with small sculptures in polymer clay and a handful of friends. We gathered every week to swap stories, snacks, and supplies. While I made a lot of great stuff in a variety of mediums, it didn't always sell. I got discouraged and focused on making music for a while.

A few years later I discovered Inktober, a month-long art challenge started by Jake Parker. All I had to do was one ink drawing a day and post it to social media. I did this challenge for three years. Each year I saw marked improvement with each new illustration.

In 2017 I did a bit of planning and ended up making a number of illustrations inspired by local artists and public figures that were well-received. It motivated me to return to Etsy and attempt selling my creative work again. I rebranded and re-launched my Etsy store on November 1, 2017.

Expect to see a a number of original illustrations, giclee prints, and the occasional sticker pack (among other things). I'm still working out my creative muscle, and figuring out where my strengths are.

Last updated on October 31, 2017
Find something you like, make a purchase. Return/Exchange policies are pretty clear here.
Illustrations and print images may be watermarked for obvious reasons - If you share my images outside the usual networks I'd appreciate a link back.
I don't do work for free. Exposure doesn't pay the bills. Support your local art and music scenes. If you can't buy, please at least spread the word.

In the event an item arrives at its destination damaged, please return it for repair, replacement, or refund.

Accepted forms of payment are listed in my shop and on each listing.

For non-electronic payments please allow extra time for your check or money order to clear before your purchase ships from my Kirkland, WA, studio. Depending on where you send your payment from, this can be anywhere from five to seven business days.

Most items ship USPS 1st Class Mail. Every effort will be made to ensure the safety of your purchase in packing for shipment. Illustrations, prints, and stickers will ship this way.

Larger and more fragile items will be listed with a USPS Priority Mail option. It is cheaper, faster, and safer. The same care will be taken with Priority Mail shipments to ensure their safety.

For now I only ship within the United States. This is due to my inexperience with international shipping. If you are outside the USA and can't live without something I've listed, please convo me and we'll work something out.

Inquiries regarding terms and possibilities are not considered a commitment to work or a transaction, so please feel free to ask me about what I can do for you. Be as detailed as you like in your inquiry -- without details, artistic license will be applied liberally. I will not begin work on a custom item without approval.

If I agree to make a custom item for you I will give an estimated amount of time for that item to be completed before adding it to my shop as a Reserved listing. I will convo you once it posts. Make your purchase within three days of listing -- I ship less than 24 hours after receiving payment. After three days, unpurchased inventory will be made available to the public. No obligation is assumed or implied.

Custom items that are personalized with a name or a date that cannot be made available to the public will require a 50% deposit. Please contact me to make payment arrangements for personalized custom items.