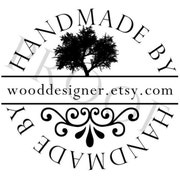 Custom made Board Games and Wood Signs made in USA.

WoodDesigner is taking a short break

I have put the shop on vacation due to a wood shortage/outage.... There has been no wood available for the past 20 days.

If you have any questions feel free to contact me as I am always checking convos and emails.

I have put the shop on vacation due to a wood shortage/outage.... There has been no wood available for the past 20 days.

If you have any questions feel free to contact me as I am always checking convos and emails.

Below is a article written by Patrick Sauer who did an interview with me in 2012 a few years ago and published the article below. It pretty much tells the story of my Etsy Wood Shop far better than I can. Thank You Pat. You can read the article below or at the website below where it is published or as in the quote below giving Credit to Patrick Sauer who wrote the article. It was sure fun talking with Pat during the interview. I hope he is doing well.

"WoodDesigner: One Man's Tree is Another Man's Treasure


Since his days in high school shop class, Linderman, 46, has loved working with his hands. His family includes a bunch of loggers, so woodworking was his natural calling, if not his career. An electrician by trade, Linderman tinkered with items on the weekends for fun until he realized, "I'd run out of things to make for myself."

He decided to enter the marketplace by making signs out of the recycled wood (he also has an in at Home Depot, which sells him discarded stuff on the cheap) in an array of designs, including kitschy slogans,handgun warnings, fishing mantras and a tribute to a '57 Chevy. Although he customized the signs' engravings, the shapes and sizes were generally uniform, which meant there was plenty of leftover wood for experimentation. He began handmaking board games in his Houston workshop, harkening back to classics like Aggravation, Wahoo and Tic Tac Toe. Once they started to sell, he even had a woman contact him about a game called Zots, which her grandfather played on a troop ship crossing the Atlantic during World War II. He made her a deal: Send the instructions on how to play the game and it was free. He isn't just a craftsman -- he's a board "gamer" as well.

That was a unique situation, but it took Linderman awhile to figure out the best way to peddle his wares. He tried selling the items at a few craft shows, but found all the traveling and "monkeying around" took him away from the workshop and defeated the point. He also didn't care for the eBay route because it required monitoring the auctions, and the percentage of sales was more than he wanted to pay. He found the channels he was looking for at artisan-driven online stores like ETSY and ArtFire, where listings are dirt-cheap, and they only take 5 percent of sales.

Although Linderman says he could never match the salary, benefits and insurance of his day job, he considers WoodDesigner more than a hobby, thanks to the state of the economy. Recently, the company Linderman works for had layoffs. He calculated what it would take to pay the bills and made sure that his side gig would provide security just in case.

Fortunately, Linderman still has his electrician job, but he isn't slowing down on the woodworking. He spends eight hours a day on the weekends keeping up with the orders, working on eight to 10 items in various states of cutting, painting and polyurethaning. His only help is "head of quality control," girlfriend Regina Randall. They do all the work, and minus the shipping and sweeping hassles, it's a labor of love.

Linderman may never make more than a few bucks, but he's helping recycle, reuse and reduce an important natural resource in a way that's a lot more fun than a homemade compost bin. It's the perfect second career for a man who doesn't think of tree limbs on the sidewalk as you and I do.

As Linderman says, wherever he sees wood, he asks himself, "Well now, that's got an interesting grain. What can we do with it?"

Patrick Sauer is a contributor for AOL Small Business and a freelance writer for Fast Company, ESPN,Popular Science, Smith and Huffington Post Humor. He is the author of The Complete Idiot's Guide to the American Presidents. Originally from Billings, Mont., he now lives in Brooklyn, N.Y. For more from Patrick, follow him on Twitter (@pjsauer), or visit www.patricksauer.com."

Last updated on October 9, 2020
Thank you for visiting my store.

I believe in honest friendly transactions and I want you to be totally satisfied with your purchase. Check out my shop and I hope you enjoy yourself. Every Item in my shop was hand made by me in my little one man hobby shop.

I will refund or exchange your item if I am notified within 7 days of receipt. Return shipping to be paid solely by the purchaser.

I need to be notified if an item is damaged in shipping so that I can file a claim. So far I have had only a few damaged items that's why I stick with USPS and FedEx. I may need pictures showing any damage caused by shipping.

Items damaged for other reasons may void my refund and exchange policy.

I accept PayPal, Checks, Money Orders, and of course cash. I prefer PAYPAL for several reasons mainly for the protections built into every transaction as well as the time element quick, fast, easy.

Cash works but DO NOT send cash in the mail. Cash is reserved for items picked up locally. All Money orders and Checks to clear before shipping.

* I charge actual shipping costs.
I will REFUND any major overpayment in SHIPPING.

I Ship on mainly on Thursdays and Fridays.
I ship to the address you provide to Paypal, Etsy, or to me VIA convo or email.

* I usually ship via Fedex or USPS.
* Items on website will ship within 7-12 business days.
* I send a tracking number on all items shipped via email
* I will automatically insure EVERY item that is shipped.

* Custom Made items will ship within 9-14 days as I need time to make your custom item and you don't want me to do a rush job. :-)

* I use recycled boxes and packaging for shipping. Meaning I don't buy shipping boxes. It’s my way of helping the environment and keeping "your" shipping costs as low as possible. So don't be surprised if your sign arrives in a Toaster or TV box or wrapped in cardboard and wrapping paper as both of us are doing our part for the environment.

If you live in Houston Texas and would rather pick an item up rather than paying shipping let me know. Who knows you might right down the block and you can save shipping costs.

I will ship INTERNATIONAL (Canada and the U.S) BUT PLEASE convo me prior to purchase for shipping quote via USPS.

If you aren't happy I'm not happy. If it is my fault I will make it right with you.

After 30 days I will replace anything I make for 25.00 plus shipping.

After 1 year I will replace anything I make for for 35.00 plus shipping.

All I may require for warranty is a picture showing the reason a warranty has been requested.