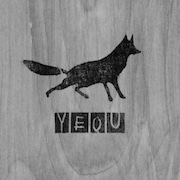 The work of Yeou Designs was inspired by the material itself. in 2014 Eric Anderson, a carpenter by trade, began collecting small pieces of scrap metals with the idea of repurposing the material into jewelry. A short length of copper pipe would become several pairs of earrings. A piece of brass cut from a door made at the turn of the century could be shaped into a pendant for a necklace. Yeou Designs began with the simple idea of making jewelry out of common building materials. The project has since evolved to incorporate Eric’s other interests, woodworking and print making.

The aesthetic is simple. Nothing polished. Often no two are the same. Exploring experimental techniques for coloring and shaping metals, Yeou pieces stand on their own. Every piece is an attempt to capture exactly what it is that’s inspiring in something timeworn and burned out.