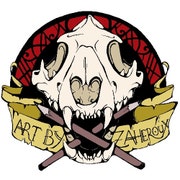 Zaheroux is taking a short break

Art by Zaheroux was officially formed in 2015 when I decided to finally take the plunge and sell my work. Since then, I have proudly sold my work around the world and published three card decks, one of them funded through Kickstarter!

What about that name? Well Zaheroux is a name I created a long time ago for some far off fiction character that never came to be. The name seemed to stick though. It gradually became a stage name when I belly danced for 8 some years in my 20’s and after I found my way back to art, I realized it is a name that represents my creative self. How about pronouncing it, you ask? I pronounce Zaheroux as “Za-hair-us” but the more correct way is “Za-hair-oo”. But either is perfectly fine with me!

All of my drawings are created by more traditional means using colored pencil and marker. They start out as incredibly nondescript doodles in my sketchbook or watered down ideas that stick in my mind and won’t go away for weeks. From there it is a messy pencil sketch which it is inked and finally colored. A drawing can take me from just 4 or 5 hours to a few days to complete depending on the size and detail work.

My inspiration hasn’t changed much since I was a little kid. I focus on Gothic inspiration, animals and nature. Not that drawing humans or fan art is a bad thing! Far from it! I just find a kind of “zen” when I am drawing animals. I like to sprinkle a little magical inspiration in my work as well, honoring the witchy side of me. It’s from this that I call myself an “art witch” of sorts. I put a lot of who I am into each piece and grow with each one. I am not sure where my art will take me next but the connections I have made, the friendships that have blossomed, I am just glad to be apart of it.

Thank you for stopping by. Whether its a quick glance, a favorite, or a purchase, I appreciate you!

Last updated on July 31, 2021
Welcome to Art by Zaheroux!
If you have any questions, please do not hesitate to contact me for clarification!

COMMISSIONS/CUSTOM WORK:
I am unavailable for custom work at this time.

**I do not send out any decks or artwork free for promotion purposes. If you are interested in my work and want to review it for your YouTube, blog, Facebook, etc. you must purchase the item and link it back to my shop. Thank you!**

TAROT, ORACLE, AND PLAYING CARD DECKS:
All deck sales are final. If the deck itself is damaged (ink smears, severely bent cards, misprints) after opening from the shrink wrap - please contact me with pictures of the damage and I will work with you to find a satisfactory solution.

PRINTS:
All print sales are final. If your print was damaged during shipping - please contact me with a picture of the damage and I will work with you to find a satisfactory solution.

PRIOR TO PURCHASE:
Before purchasing, please take a quick moment to make sure your Etsy and/or Paypal address information is correct.

TURN-TIME:
I usually try to ship within next day of purchase. If item(s) are purchased on a Friday or Saturday, I will ship out on Monday.

SALES TAX:
If you are purchasing in Michigan, there will be a 6% sales tax added to your order per state law.

DOMESTIC SHIPPING OVERVIEW:
Please be aware that shipping costs are non-negotiable. They are flat rate and cannot be changed.

DECKS - Domestic:
Currently I will only ship a max of TWO (2) decks domestic via Priority Flat Rate.
If you are interested in purchasing more than two decks or wholesale, you must send me a message prior to purchase. Additional shipping costs may apply.

INTERNATIONAL SHIPPING:
Unavailable at this time

COMMISSIONS/CUSTOM WORK:
I am unavailable for custom work at this time.

WHOLESALE:
Please contact me for more information. International wholesale is not available at this time.

ARTIST/BUYER RIGHTS:
Artwork is shown at a low resolution for online purposes and the watermarks will not appear on the final product but please always respect the artist. My artwork is not to be reproduced, copied, or distributed without my permission. Any purchases of my divination decks, prints or originals does -not- give the buyer reproductive rights.

DISCLAIMER:
My tarot and oracle decks and their companion books are never a substitute for professional guidance and counseling. Be advised they are to be considered as a product for entertainment purposes.

Unfortunately due to my work and show schedule: trades, commissions and custom orders are unavailable.

I am open to wholesale orders! If you are interested, you must send me a messaged here on Etsy - I will be more than happy to work with you.
(Please do NOT order until you have spoken with me first. Wholesale purchasing is only available for US locations at this time.)