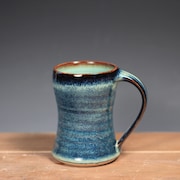 LCroslandCeramics is taking a short break

Note from shop owner My shop is now closed until the next update in April. See my social media for details near the time.
If you have any questions email : Lmc-ceramics [!at] hotmail.couk

My shop is now closed until the next update in April. See my social media for details near the time.
If you have any questions email : Lmc-ceramics [!at] hotmail.couk

I became interested in ceramics during my A-Levels in Lancashire, then decided to study at Wolverhampton University. During my studies I worked for potter Peter Beard in Leamington Spa, he went on to become my mentor, offering professional advice. Following my studies I moved to Devon to work for potter Penny Simpson for 3 months. Then I moved to St Ives in Cornwall to train in production pottery at the Leach Pottery.
After my training I set up my own studio in Kent, before moving back to St Ives in 2018. I now have a studio at the Gaolyard Studios on Dove Street. I also teach on the throwing course at the Leach Pottery, teaching one course per month.