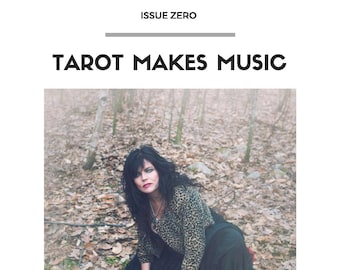 I began reading tarot for myself in 2005, shortly after my Dad died. I suppose I was looking for something ‘else'; something supernatural, some evidence of life after death. In tarot, I didn't find a gateway to another world (exciting as that would have been). What I DID find, however, was a human, artistic, slightly mysterious and deeply fascinating tool that helped me get my head around the life that I was actually living—rather than obsessing over what would happen to me after I die.

I began reading tarot for family and friends at first. I then provided free email readings for years through the Tarot Association of the British Isles (of which I am an endorsed reader). I later became a tarot columnist for various UK magazines. I have also written a unique DIY zine/magazine called 'Tarot Makes Music' about the many quirky connections between tarot and music.

Over time, I realised that I adore providing written readings, rather than face-to-face readings. Quite simply, I love to write. I love to sit and really spend time with your question, and to carefully weave a sensitive, well-written answer that you can refer back to again and again.

So, what’s actually going on in tarot, then? I can’t answer that. It just works, and that’s enough for me. As a fully qualified counsellor and someone with a long history of supporting LGBTQ people emotionally, I constantly question any assumptions I make about people’s lives during readings. I aim to read tarot inclusively, thoughtfully and sensitively for everyone!

I also bring a Buddhist approach to the cards. I am a practising Zen Buddhist and it is deeply important to me that my readings are compassionate and that they do not cause any kind of harm. I write your readings with care and kindness.

If you have any questions at all about my approach to tarot, just get in touch. I'd love to hear from you!

Smiles from the Scottish hills,

See this Seller Handbook article for a sample privacy policy you can customise for your shop.
If you deliver to the EU or offer your listings to buyers there, you're required to have a GDPR-compliant privacy policy by 25th May 2018.
Privacy policy
Tarot readings are 100% confidential and I never share info about you or your life with anyone, unless I suspect from your information that you may seriously harm yourself or others in your life.
Etsy prohibits the use of buyer information for unsolicited messages. See our Privacy Policy for more info.

TERMS AND CONDITIONS FOR TAROT READINGS
I won’t answer questions about your health, as only a qualified medical professional can tell you about your physical condition. I also cannot advise you on legal or financial matters. I am however happy to work with your feelings around any of these issues, or how they affect you.

I can’t tell you what other people in your life are doing or thinking. My readings are about you and the control you have in your own life.

If I think you are in deep emotional turmoil, I will let you know where you can find a reputable counsellor, possibly instead of a reading.