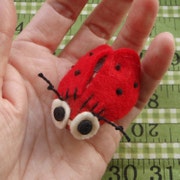 I do not give refunds for custom made orders.

I do not give refunds for PDF sewing patterns.

If, for any reason you are unhappy with your purchase, please contact me to discuss the matter further.