Please select dimensions
Whoa! You can't buy your own item.
Arrives by Dec 10-16 if you order today.
Hooray! This item ships free to the US.
Dec 10-16

This Giclee Fine Art Print of the Tibetan Meditation Buddha Yamantaka comes from an original thangka commissioned by a practitioner in 1998. She had searched for an accurate portrayal of Yamantaka or Dorje Jigje on trips to Nepal, Tibet and Dharamsala India and had come up empty handed. There are many 'thangka sweat shops' in these places which have a mass production assembly-line using very young artists, who aren't too concerned with accuracy of proportion or color and this is all that she saw. She asked me if I would do one for her, being a watercolor painter who worked in a similar style and a practitioner. We consulted my Tibetan Lama Denma Locho Rinpoche and I was given permission to do it and subsequent thangkas, as long as I used the proportional grids.

This Tibetan Yidam is used (under the guidance of a Lama) to meditate on transforming anger into wisdom and transforming the fear of death. A mirror of sorts for our deluded perception of reality that causes the anger to arise. It is traditionally said though, that just 'looking' at this image can pacify anger and this is one of the reasons I offer it to the 'lay' community as well, in the form of a print. The Tibetan Lamas at the top are Tara Tulku, Je Tsongkapa and His Holiness the 14th Dalai Lama. (when the Dalai Lama saw this, he had a chuckle, because I put glasses on him and normally the Tibetan painters wouldn't have done this, because poor eyesight is a sign of mundane imperfection). At the bottom of the print stands: Kalarupa (or Yama the Lord of Death) and his sister Chamundi on top of a bull, protectors of the practitioner who meditates on this tantra.

After you place your order, KaylaKomitoSacredArt will take 3-5 business days to prepare it for shipment.

KaylaKomitoSacredArt puts your order in the mail.

Beautiful print with extraordinary detail from a very talented artist. One note for those buying the 16 x 20 print- the image is 16 x 20, but the paper is 20 x 24. Keep that in mind as you shop for a frame.

Stunning print of a stunning tangkha. The detail is wonderful, and unlike some tangkhas, the deity has real life and energy. Although it's a print, it's a very high quality giclee on nice paper and frames up beautifully. Thank you! 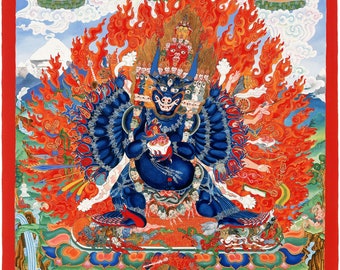 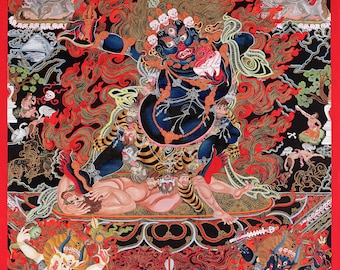 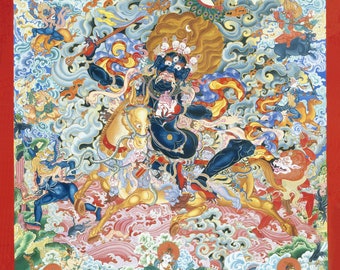 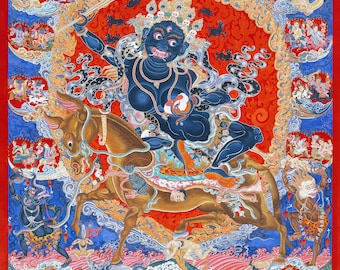 You will have 3 days from the date of receipt to inspect your order and notify me by email of any problems and request an authorization for return. Because handling and packaging of fine art prints and handicrafts requires professional care to avoid damage we only accept returns which have been properly and securely packaged.

If we have made an error and shipped you the wrong item we will credit your account for the cost of the return shipping and we will pay the shipping for the replacement.

In the event of damage to an order during shipping, or loss of an order, you will need to process the claim. Use your tracking number for this process and to collect the insurance coverage.

All fine art prints are are carefully and professionally packaged in protective tubes. We do everything possible to insure that your order arrives undamaged and in good condition, but we have no control over damages incurred by careless processing during shipping, or for lost packages, which is why we provide a USPS tracking number for you on domestic shipments. For international shipments we will forward a customs declaration number.

Please note that no international package will be marked as a gift. All duties, taxes and customs charges, if any, and special rules are the buyers responsibility. International buyers need be aware of their own country's laws and regulations.

We make every effort to ship your order within 3 days of receipt, unless otherwise noted on the shop's main page, in which case we will indicate a "NEXT SHIPPING DATE" and confirm this with you. Extended shipping dates, if necessary, are a consequence of vacation, travel, and so forth.

It is our desire that you are completely happy with your print. Please post feedback to ETSY and tell others about the print you have received.