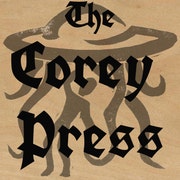 Announcement    Hand carved madness from Salem, MA. From Lovecraftian nightmares to medieval UFO abductions with a bit of Occult Conspiracy in between, these designs are hand carved, bound in ink, and pressed to wood right around the corner from where Giles Corey met his fate during the Salem Witch Trials.

Hand carved madness from Salem, MA. From Lovecraftian nightmares to medieval UFO abductions with a bit of Occult Conspiracy in between, these designs are hand carved, bound in ink, and pressed to wood right around the corner from where Giles Corey met his fate during the Salem Witch Trials.

Around the corner from where Giles Corey was crushed to death during the Salem Witch Hysteria of 1692, there is a crooked house that sits on cursed land. What brought upon this curse? Restless ghosts? Strange celestial alignments? An old lightbulb factory that leeched who knows what into the soil?

We may never know.

What we - I - do know is that at times a fugue over takes me and I reach for the sharpest of my tools. Shaking hands still as knives poise over a pristine surface. Images float through my mind as I work to give them form. Is this the same fever that filled the ancient courts of Oyer and Terminer with spectral evidence? The same inspiration that haunted H.P. Lovecraft on his many visits to Salem? The visions of witness who saw the strange lights in the sky over Salem Harbor in 1952?

To excise these visions, I press them out, trap them in ink and shackle them in wood.

And then I mail them to you.

Last updated on April 29, 2022
Turn off that light! Everything in this shop has been designed and carved by hand before being pressed or printed on a variety of surfaces. Due to the chaos inherent in hand-printing, there may some variations in completed material. Rest assured - I won't send out anything I wouldn't hang in my own home.

If an item is damaged in shipment, let me know and I'll try to make it right.

You pay online via Etsy and I use your money to make more stuff. I only post what I have on hand for sale.
I can do custom variations - message me for more details.

I mail panels via US Priority 2-Day Mail to the US.
I also can ship to Europe, Australia, and Canada.
If you live in a more arcane location, send me a message and we can figure out the rites and rituals to get you your piece.
Pins ship via standard post - no need to pay more than the item to ship it!