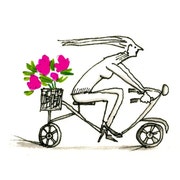 LindsayduPontShop is taking a short break

Note from shop owner LindsayduPontShop is on vacation.
Please come back later or email Lindsay at
lindsay [!at] lindsaydupont.com

LindsayduPontShop is on vacation.
Please come back later or email Lindsay at
lindsay [!at] lindsaydupont.com

It all started with Funny Shows.
I grew up in a big house in the Midwest of the U.S. There were six kids. The big three and the little three. The little three included me and my younger twin brothers. I developed a flair for the dramatic to get attention in such a crowd. During a certain period of our childhood, my younger brothers, tucked in for the night, would beg me for a 'Funny Show'. Not one to argue, I would morph into a character, always with an accent, from places we'd never been.

The ladies are created in the same way. Inspired by the energy of the moment and the act of drawing itself. But instead of an adventure and an accent, they are defined by the expressions on their faces, their body language and their clothing (or lack thereof).

I hope the ladies with their joyful observations on life speak to you, make you smile, laugh and leave you begging for more!