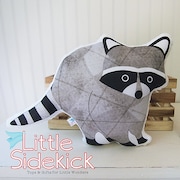 LittleSidekick is taking a short break

When I was a little girl, my mother not only sewed clothes for me to wear, but every Christmas each of my Barbie dolls would receive a new wardrobe befitting a celebrity. Even at that young age, I appreciated the quality of those tiny clothes that could be tossed into the washing machine with my own, petite outfits with seams that did not split open and snaps that did not fly off the first time the clothes were worn by my dolls.

In addition to the superior quality of the miniature clothing, I recognized that it was my mom’s creative choices and personal touches that so distinguished my dolls' wardrobes: the artful pairing of different fabrics, the harmonious color choices, the carefully placed embellishments. I often recognized a piece of one of my own outgrown dresses or the previous winter’s coat, now given a new purpose. If given a choice between a mom-made Barbie dress and one purchased “off the rack”, I would choose mom-made every time.

My friends, who were limited to choosing from the dozen or so options one might find in the Barbie aisle at the toy store, were envious of the size and variety of my dolls’ wardrobes. My dolls had an abundance of pieces in which they could be attired: a satin and lace wedding gown and veil for Barbie and a dashing tuxedo for Ken, faux fur coats and stoles, cocktail dresses, sundresses, “designer” jeans, swimsuits, leotards and tutus. My Barbies’ closet was a microcosm of the fashion trends of the era, full of bell bottoms, disco dresses, wide collars, velvet blazers, leg warmers, and one-piece polyester jumpsuits. They were the most well-dressed dolls in the neighborhood!

Though I did realize, even as a child, that those small, beautiful garments were special, it wasn’t until I was older that I realized the true value of the doll clothes my mother had made. As an adult, I understood that since she worked outside the home, and I never saw her making the doll clothes, she must have made them late in the evenings after I had gone to sleep. When I called her today and asked her about those clothes and why she chose to make them herself, she said that the price of the ready-made clothes in the toy stores made them prohibitive, and she would only have been able to afford to purchase one or two outfits.

Of course, I’m sure my mom wasn’t factoring in her labor and the value of her skills when comparing the cost of making clothes for my dolls versus purchasing ready-made doll clothes. If making doll clothing had been her means of employment, and her skills, creativity and labor had been fairly compensated – if the quality of the materials used, the attention to detail and the durability of her creations had been taken into account – those clothes she lovingly made by hand would have had a much higher price tag than anything to be found on the shelves of any store.

I asked my mom whether she enjoyed making the doll clothes, or if viewed it as another chore: “No, it wasn’t a chore! I enjoyed it. It was like getting to be a fashion designer. And I was able to give you so much more than if I had purchased them. Your dolls had everything!”, she said with understandable pride. I told her I hadn’t forgotten. I no longer have the doll clothes, but I will cherish the memory of them, and the love that went into making them, forever.

My mom taught me how to sew when I was eleven years old, but my love of making and creating began even before that. Often my need to make something is irrepressible and all-consuming, and if not allowed to act upon it, I find myself feeling restless and irritable – so it is no surprise that as an adult I was drawn to work that allowed me to assuage my creative compulsions. For 17 years, I worked as a touring musician, singer and frontwoman for a quirky acoustic act from Austin, TX, called the Asylum Street Spankers. Our travels took us all over the United States, Europe and Japan, and our discography includes more than a dozen LPs, EPs and DVDs.

In 2011 a changing music industry, a faltering economy, and my tiring of spending so much time away from my family colluded, so I retired from making music professionally and started focusing my efforts here, making things by hand, one at a time, and with every bit as much love and attention to detail as those doll clothes my mom made so many years ago.

Can I get a made-to-order item made FASTER? I need it right away!

Most often the answer is yes, but please inquire BEFORE you purchase. Production times vary depending on the number of orders ahead of you in my queue. Whenever possible, I'm happy to move your item up the queue and get it to you when you need it, but if we haven't made arrangements beforehand, your item might take the full 7 business days stated in the listing before I can have it ready to ship.

Once my item ships, how long until it arrives?

International Shipments: Items shipped out of the US will typically arrive within 10-14 business days, although the occasional item can take much longer.

Do you offer shipping upgrades?

Yes, absolutely. If you are concerned about getting your item(s) in time, please just contact me. I can upgrade your shipping to Priority or Express, depending on how quickly you need it, and will inform you of the cost beforehand.

Do you offer gift wrap?

Because my items vary so much in size and shape, it's not practical for me to stock gift boxes suited to every item I sell. Smaller items are typically packaged in a craft paper bag sealed with a cute washi tape. The recipient still gets the experience of opening a package, but it's not "traditional" gift wrap. Larger items are typically packaged in a clear cellophane bag and tied with ribbon or string. I CAN include a little handmade card and envelope with your message written on it. Just let me know you'd like a card, and what you'd like me to write on it.

Can you make an owl/elephant/etc in custom colors?

Yes, absolutely! Just let me know what you're looking for, and I'm happy to show you the fabrics I have available in your colors. I'm also happy to order fabric specifically for your custom order if I don't have anything that fits the bill. If you're trying to match a nursery or baby shower colors, you are welcome to send me pictures to point me in the right direction. I want to make sure whatever you order from me is exactly how you pictured it, and I aim to exceed your expectations.

Can you make something from my child's old blanket, clothing, etc., or from fabric that I provide you?

Yes! Just contact me and I'm happy to help. Often I am able to provide a small discount when you're providing your own fabric.

Can you embroider a name on an item?

Yes, I offer custom embroidery. Just purchase this listing in addition to whatever item you're buying: https://www.etsy.com/listing/188326815/add-embroidery-personalization-to-your
You will be prompted to choose a thread color and font. You can let me know the name and preferred placement for the embroidery by leaving me a message in the space provided at checkout. If you need help deciding which font and thread color will look best on your item, or have any questions at all about the embroidery option, just contact me and I'm happy to help!