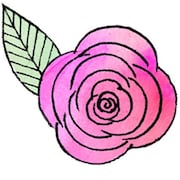 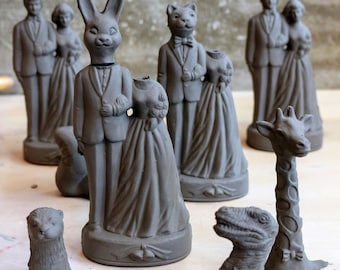 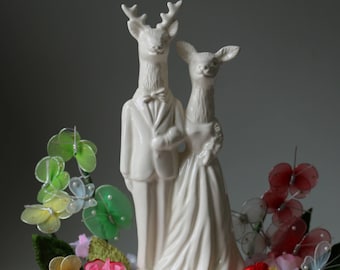 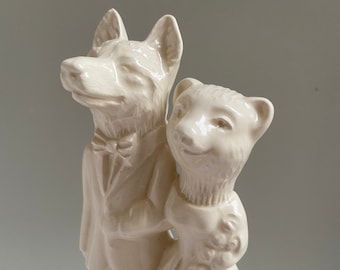 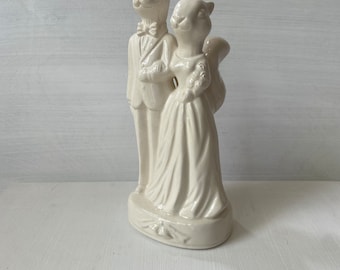 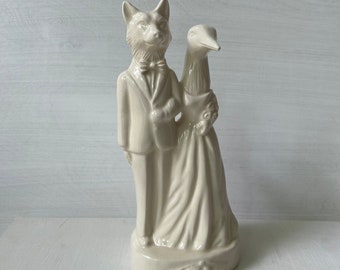 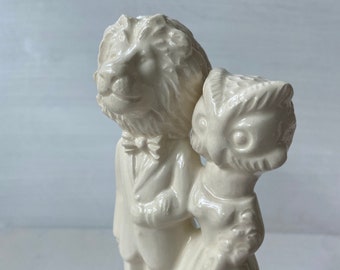 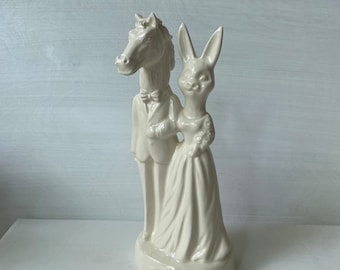 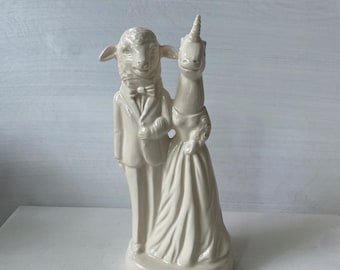 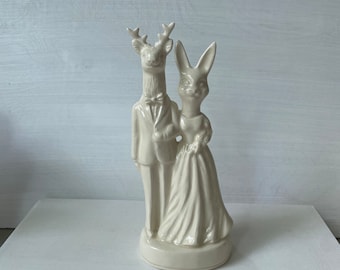 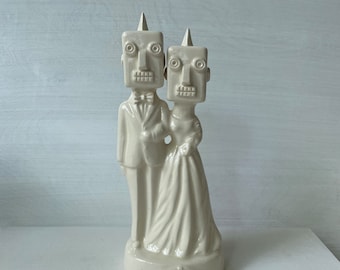 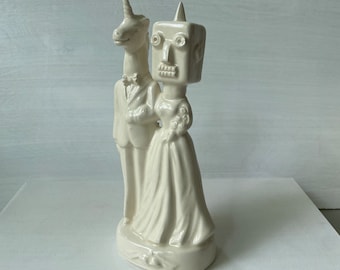 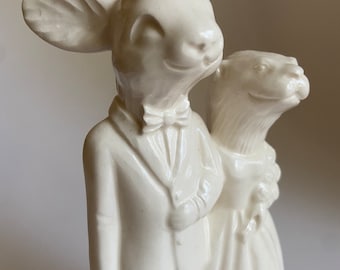 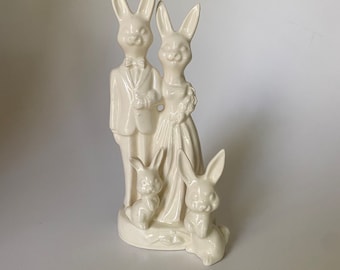 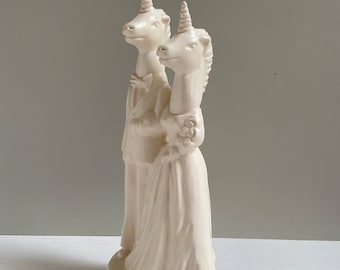 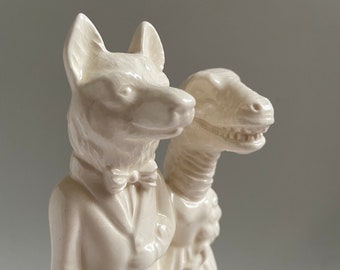 Thank you for visiting the Etsy shop, and congratulations if you have a wedding around the corner!

I make wedding cake toppers by casting liquid clay into handmade plaster molds. The cast elements are cut up and rearranged to make hybrid toppers with animal heads and human bodies.

This is a ceramic building process I began in graduate school, over a decade ago, when a surprise donation of plaster molds showed up at the school studio. I became obsessed with the slip casting process, and every smart-ass bone in my body wanted to tinker with the cute and generic figurines that the molds produced. I added Ken heads to deer bodies, gave lambs eight legs, and put chimps in ball gowns. Discovering Etsy in 2007 helped me find new homes for the vast menagerie building up in my studio. My Etsy shoppers encouraged the creation of wedding cake toppers, and the popularity of the wacky couples led me to open a shop specifically for these bridal oddities.

I would not have guessed I'd end up anywhere near the bridal industry. At my most glamorous, I still have clay in my hair. I have the introverted impulses of a person that spends a vast majority of her time listing to podcasts and making stuff. That said, it is an unlikely honor to make objects that people connect to personally. Couples select my toppers to represent their relationship and their love for one another and that means a lot to me. I imagine the possibility of one of my strange cake toppers being taken out of an attic box by great-grandchildren. And those kids knowing that their great-grandparents.....were a little nuts.

Melabo ceramic objects are shipped with great care, but on rare occasions a piece will break. Please photograph the damaged topper and the package so a claim can be placed with USPS. Convo me these images and we can discuss replacement options and timeline.

All the listing except for the Custom Topper are made and ready to ship. Give me a couple of days to make sure that pieces are packed with care. Ceramics certainly prefer a gentle ride.

I use the US Postal Sevice and I have had great results. A standard size and weight piece from the shop will ship PRIORITY MAIL, and is expected (although not promised) to arrive in 2-3 business days, after packing and boxing. Please give about ten days before contacting me with concerns, I try to ship with care and I will take extra time to make sure the box and the packing materials ensure a safe voyage.

****INTERNATIONAL ORDERS:
Please be aware that some countries charge a tax on packages. The tax can be steep....... but there is nothing we can do about that from this end.

Custom toppers are $75. They take 4-8 weeks to make.
The timeline depends on how close I am to getting the kiln filled, contact me if the wedding is soon, sometimes faster turn-around can happen. Also, please look through the available toppers listed in the shop. They can ship right away.

Head choices are listed in the drop down menus within the custom topper listing.
https://www.etsy.com/listing/269996729/custom-cake-topper-you-chose-the-heads

Because I work with a liquid clay I can only make the heads that I can cast in my handmade molds.... no handbuilding with this clay. The options are a bit limited and may not suit every relationship.

Please keep in mind, there will be minor differences between one topper and another. Each is made individually by me, and one day I may attach a head at a slightly different angle then the example in the photo. Or the curve of a tail may be more loopy from one day to the next... you get the idea. The clay is an off-white. It reads as white, not cream, but I would not call it a stark blue white. The clear glaze will sometimes have flecks of grey that can be seen up close.

Many examples can be found by scrolling through the "sold" section. I also have a collection of images on pinterest:
https://www.pinterest.com/melabogo/melabowed-cake-toppers-in-action/