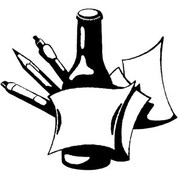 Announcement    Handcrafted notebooks upcycled from craft beer boxes!
Social media visitors - See an item on Instagram or Twitter, but don't see it here? Feel free to contact me if you were looking for something specific! Thanks for visiting!

Handcrafted notebooks upcycled from craft beer boxes!
Social media visitors - See an item on Instagram or Twitter, but don't see it here? Feel free to contact me if you were looking for something specific! Thanks for visiting! 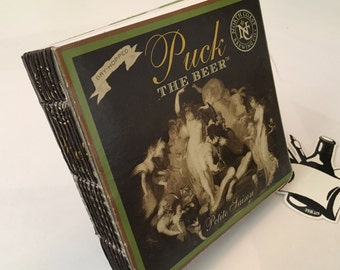 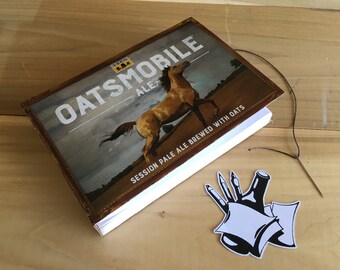 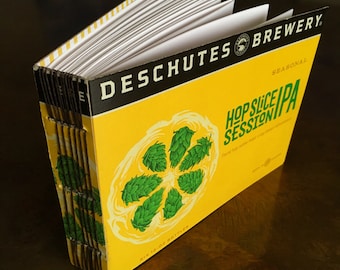 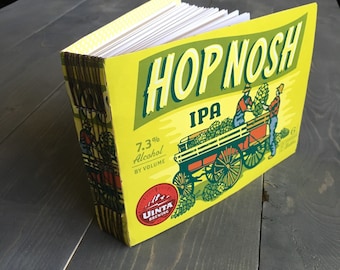 I’ve always been an avid doodle/sketcher, but last year I really decided to be intentional about drawing every day. After going through a bunch of regular, plain black sketchbooks, I began looking for something that had a little more personality.

At the same time, one of my favorite things to do was sit in a coffee shop or a local bars, people watch, and just sketch to pass the time. Few things are as cathartic to me as sitting in a quiet corner, with either a cold beer or a freshly-roasted coffee in one hand and a pen in the other.

In a few of the bars, I began noticing that the six pack boxes the bottled beer comes in either gets thrown away (some places still don’t recycle), and I thought that it was a shame that the boxes that some designer had worked hard to create was ending up in the trash. After that, the idea kind of fell into place.

Some for me, one for you
Once I made one for myself (my original Mercenary book), some of my artist friends began to take notice. A few asked if I could make one for them. Eventually, I began scouring BevMo, Total Wine & More and some local craft beer shops and bars for boxes I could repurpose.

Making these for my friends, I learned a lot about what did and didn’t work. I learned about which stitching method was the most durable, and what paper was the most usable for drawing. Eventually, my friends suggested I start selling them, and hence, the Etsy shop was born.

The tasting notebooks came along after about six months, and were just a natural progression of what I was already doing that I can't believe I didn't think of it sooner.

Last updated on May 9, 2022
A result of the great Drink & Draw movement, I began making my own durable everyday sketchbooks handcrafted from craft beer boxes, and people keep asking me where they can get one. Why carry a boring sketchbook when you can carry one that reflects your personality?

If you are unhappy with your item(s), please let me know. I will do by best to fix the problem. I will give you a full refund upon receipt of a returned item.

I accept credit card and PayPal. Items ship once payment is received. AZ sales tax is added to AZ sales.

All items will ship within 24 hours after payment is received. Everything is shipped through USPS and most orders are shipped as First Class arriving in 3 business days. Let me know if you would like tracking added.

Please be mindful of what shipping address you give at the time of your order, and that Etsy and Paypal have your current and correct address. If you plan on being away from home for a long stretch of time be held responsible for lost or stolen items if you are not home to receive them. Otherwise, I am happy to correct any error I make in shipping.

If an item is lost in the mail or is being returned to sender, we must wait 30 days for that to clear up before I will refund or replace an order.

Please message me regarding custom orders. I do not require prepayment. Custom books (Dad only drinks Shlitz!") are great, there might be a lag time in production if I can't find the box you're requesting.
I will make your custom item and notify you when it is ready and posted on Etsy. The item will have a hold for you in the title. You will then purchase your item like normal.

Most of the boxes I use come from craft beer shops or bars in my area, and are given to me before they get tossed in the recycle bin. I have such a positive response from local bars and distributers that I assume that I'm not stepping in anyone's toes. If you own/run a craft brewery and aren't happy with my books please let me know. I have no problem with you exercising your trademarks and I will comply. But free advertising, right?