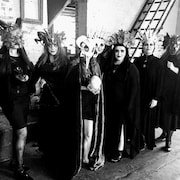 WingedMotivation is taking a short break

Note from shop owner I am on a short trip :) My shop is temporarily closed.

I am on a short trip :) My shop is temporarily closed.

I live in a fantasy world filled with faces - natural and otherwise.

“If you want your children to be intelligent, read them fairy tales. If you want them to be more intelligent, read them more fairy tales.” ~ Albert Einstein
With a Bachelor's Degree in Women’s Studies, I celebrate female life, ALL life. My goal is to empower myself and others in an innovative, fun, whimsical way, a way full of often painful truths. My hope is my art will inspire us to remember who we are as valuable divine individuals, that we are the meaningful creators of our own impactful lives, and to Stay Wild! May we express our authentic selves safely and FREELY in a Joyful MAGICAL Strong Space.
Dianna creates a fantasy world with leather. Since her childhood in northern Maryland, where she lived in a pre-Civil War house surrounded by farms and nature, she has been inspired by the fanciful and macabre. Dianna is struck by the dark whimsy and relevance of childhood tales. Lewis Carroll's "Alice in Wonderland," with its (il)logic, and nonsense, has never ceased to thrill her. This fanciful, wild, witty book, with its occasional theme of dismemberment and death affected her so profoundly, that as a twelve year old child, she memorized two chapters of it.
Other influences include: Pat Kazi, a friend of her mother's, whose fanciful artwork is exhibited in several hundred shops and galleries coast to coast; Edward Gorey, an American writer and artist noted for his macabre illustrated books; and most recently, The Maryland Renaissance Festival where she's worked on occasion.
Her love of leather goes back to horseback riding, which she began at the age of eight. "Leather just smells good! Working with it is pleasurable to all of my senses and I LOVE IT! Quite surprisingly costumed accessories, it turns out reveal more about us then they conceal. I find them beyond fascinating and quite cathartic to make."
Dianna has a degree in Women's Studies. Her childhood home had a strong, infectious musical theater presence, with siblings often singing in harmony and a mom who constantly played Show Tunes on the turntable. She has performed in a number of community theater productions and a few operas. She's sung in choirs and small traveling groups as well. Her three children have all performed on stage. "Theater and Costumes - they just go together!" Dianna played Blanche Perry at the Fisher's Renaissance Festival in Indiana seven years ago. Then, she played Sirena a tragic Siren.
Her oldest daughter is a published author, her son, deceased, had a degree in chemistry and played a mean guitar, and her youngest daughter helps paint Dianna's work on occasion and works as the artistic charge at UMBC in their theater department. She has a degree in Fine Arts. Dianna recently moved from Indianapolis to a house on a hill, on a cliff, on a point, on an island on the ocean in Maine.

"We are the music-makers,
And we are the dreamers of dreams,
Wandering by lone sea-breakers,
And sitting by desolate streams.
Yet we are the movers and shakers,
Of the world forever it seems." ~Arthur William Edgar O'Shaughnessy