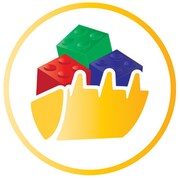 brickablocks is taking a short break

Note from shop owner We're taking some time off to tidy up...

We're taking some time off to tidy up...

He got his start designing gifts and accessories, built with LEGO® bricks, in 2013 - when a friend requested a Harry Potter themed Lamp for their nephew. Brian was a natural, applying the same principles to design that he learned during his 18 year software development career.

He now excels at creating clever, quirky and playful gifts and home accessories that range from simple key organizers, to t-shirts, and even massive mosaics and custom models. Brian's work has been featured all over the Internet, including Make Magazine, The Brick Fan, and popular LEGO® fan site Brickset. His clients include Warner Brothers Studios, Pixar Animation studios, Capital One Bank, and Art Partners Group.

In addition to product design, Brian is a talented digital illustrator and has created artwork for clothing that is featured at several major online retailers. Brian is also an accomplished developer, who started his own website featuring LEGO® news and custom model instructions.

In recent years, Brian's attention has turned to cultivating a community of LEGO® fans in the Richmond, Virginia area. He now spends much of his time designing models and planning community events in his role as LEGO® User Group ambassador for RVA LUG, a recognized member of the LEGO® Ambassador Network.

Last updated on May 9, 2022
Hello Friends, thank you for checking out our Etsy Shop. Did you know we also have a website? To learn more about us visit http://www.brickablocks.com

Returns accepted within 14 days of receipt. Cost of item will be refunded to you once your return is received in good condition. Buyer is responsible for return shipping costs.

Also, we do not list items unless they are 100% complete and ready to box up and send to you. You will generally receive a shipping notice and tracking number within 24 hours.

For all of our items listed here, the shipping profile cost covers packing materials, insurance and either priority mail or first class delivery via USPS with tracking.


International Orders:
To our international customers, please be aware that we ship from the US and your postal service may require you to pay some form of VAT or customs duties on the imported package. It is your responsibility to pay these fees when your item is delivered. We are unable to pay them on your behalf, unfortunately.

For items damaged in transit, please contact us immediately. In almost all cases, a replacement can be built and shipped to you at no additional cost. We'll even pay return shipping for the damaged item. After all, it is our responsibility to get your one of a kind purchase safely to its ultimate destination.