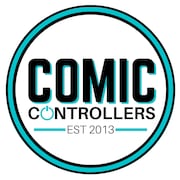 ComicControllers is taking a short break

Note from shop owner Comic Controllers is currently closed for new orders. We will start taking orders once again when we catch up on our current workload We expect to reopen in January of 2022 - we are sorry for the delay but hope you'll consider our services when we reopen again.

Comic Controllers is currently closed for new orders. We will start taking orders once again when we catch up on our current workload We expect to reopen in January of 2022 - we are sorry for the delay but hope you'll consider our services when we reopen again.

In 2013 while playing Xbox 360, we looked down at the controllers and realized that they're some of the most bland things around. Plain colors are boring! With that, the idea popped into our heads to create something that's both artistic, and totally awesome! Combining both our love for comic books and video games, Comic Controllers was born!

We quickly got to work creating our first controller and original prototype and after hours of working, we ended up with what we thought had the potential to be an amazing product! Our style and technique has changed a bit since the original. We found out what works, and what doesnt, when making a comic controller, and overall perfected our technique to ensure a quality product that's both fun and functional!

Last updated on July 23, 2020
Comic Controllers was the first in the business to make 100% custom and unique comic book video game controllers! Now we've expanded to painting unique designs! You can be sure that with every Comic Controller you purchase, you are receiving a unique, quality product that is not only a functional and fun device, but also a one-of-a-kind piece of art!

We design and create our custom items with the utmost care and precision to give you the best product that we can possibly make. Each controller that we ship out is quality tested to ensure the best performance.

All of our controllers come with a 90 day warranty on the custom work.

CANCELLATIONS: We do NOT accept cancellations under ANY circumstances. In the event we DO allow a cancellation due to extenuating circumstances, you will incur a 20% restocking fee. We purchase and make each item on demand.

If you cancel your item, we will be losing money on supplies! A cancellation fee is a necessity. We thank you for your understanding.

WARRANTY: We stand behind every controller we create. In the event of a controller defect, we offer a full refund or repair (within 7 days of item receipt). This policy is only for defective controllers. All controllers are tested for quality to make sure they work like new before being shipped out.

Items being given as gifts still fall under the same policy. Items stated to be defective after 7 days of receipt will not be returnable under any circumstances.

RETURNS:
Returns on custom controllers are done on a case-by-case basis.

Due to the fact that these controllers and face plates are made-to-order products, unfortunately we cannot accept returns for any reason other than a defective controller.

In the event that we do accept a return on a custom item, the item will incur a 20% restocking fee and the buyer will be responsible for all shipping fees. The buyer may also incur a $15 design fee. Non-defective custom order items can only be returned if they are in their original box with all paperwork and are in BRAND NEW condition. Any additional damage to the item will be deducted from the cost of the refund. In the event that an international order is returned and an import fee is imposed upon Comic Controllers for the return of the item, this fee will be deducted from the refund.

If a controller is returned, it must be in the same condition that it was shipped in. Controllers that have been used or show major physical wear or damage cannot be accepted for returns.

Failure to pay for return shipment fees when required under certain circumstances as determined by Comic Controllers will result in a forfeit of the buyers item.

CLOTHING: Unfortunately clothing items CANNOT be returned under any circumstances. Our clothing items are designed by us, and printed by a 3rd party. Because of this, refunds and exchanges are not available.

If you have any additional questions whatsoever please feel free to ask.

FAQ
Q: Can I get ......?
A: Probably! We're open to custom order commissions are are happy to discuss the designs with you over message!

Q: Are these useable? Will they wear out over time?
A: Yes! And no, they shouldn't! We've sold hundreds of controllers and have had very few complaints about the items falling apart or getting damaged over time. You're more likely to replace your game console before our controllers - but we offer a 90 day warranty on the paint job if anything happens to it out of the box.

That being said, even that beautiful controller you bought from Microsoft and Sony gets worn down overtime.

Q: Do you use official _______ products?
A: Everything we make, we use official Nintendo, Sony, or Microsoft Products unless otherwise stated or offered by the listing at a discounted price.