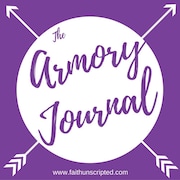 The Armory Journal, THE resource for Victory in Christ.

What is the Armory Journal, what is it for, and how was it inspired?

I have been a believer of Jesus Christ pretty much my whole life. I grew up attending Church. I’ve held leadership positions, written and taught Bible studies, and even have a Masters Degree in Theology. You might think with all of this, that I would be an unshakeable, unwavering and undefeatable woman of faith. You would think.

But life gets tough, and my life has been no exception. The last few years have been pretty difficult, and there have been times that I have found myself really struggling to cope with it. And that bothered me...particularly, as a woman of faith, I felt that things were getting to me more than they ought to. As a follower of Christ, who is promised help, a reason not to fear in the Shadow of the Valley of Death, and Victory in Christ, I felt shouldn’t be struggling as much as I was. Was my faith letting me down? Was I a fake? Or was something missing?

I think that if you look throughout scripture you will find portrait after portrait of incredibly strong women. Meek? Sure. Often subordinated or even oppressed? No doubt. But strong, and victorious just the same.

A few years ago I heard a talk by a wonderful speaker that referred to herself as a Handmaiden to the Lord. I loved the beautiful picture this painted. It was inspiring to picture myself this way. To be a handmaiden is to be in a position of intimacy, honor, service and humility. But as I was thinking, praying and studying my way through this tough season, the idea of being a Handmaiden felt lacking in something. Then I re-discovered the image of the Shieldmaiden. She is everything that the Handmaiden is, but more: because when opposing forces threaten to knock down her door, she is armed, trained and prepared to resist.

This is what I wanted to be. A servant of Christ who is also strengthened by him to be victorious over the hardships, battles and attacks that come. This gave my personal study focus and direction, and my life started changing. As I studied, I knew that this is something that is so important not only in my life, but in the lives of other women as well. Surely I am not the only woman out there who desires to be Victorious in Christ? Surely I am not the only one who wants to wear the Armor of God, who wants to fight like a girl, and also be a spiritual force to be reckoned with. Maybe I wasn’t the only one who had been inadvertently taught that to be a woman of faith was secretly a state of subtle victimhood? Maybe I wasn’t the only one that didn’t want to live that identity anymore. I want to be a Shieldmaiden of Christ. Do you want to be one too?

As I worked on this project, I soon became convinced that this would be something that would have value for others, not just myself. But how would I share it? I explored options, and still use some. But mostly I just studied. And took notes. Lots of notes. And early on, I thought that at least part of this project would involve an element of interaction. I started thinking about creating a non-linear journal. Something with different segments that would help the Shieldmaiden develop and grow closer to God, and deeper in her faith. Something flexible that could be personalized. I began thinking and praying about a devotional journal that could be a resource for us as God develops us into the victorious women he has designed us to be. Inspired by the Armor of God in Ephesians 6, I decided to call it the Armory Journal. Armories are depositories used to store resources for military use. Weapons and ammunition are the obvious things stored there, but you’ll also find things like uniforms, blankets, non-perishables and even personnel. Armories can be the one-stop shopping for a military force to get what they need to function.

Likewise, I see God’s equipping work in our lives this way: things that seem random and disconnected, aren’t really. The sermon series you’ve been getting at church. Your (sometimes) daily devotional reading, that famous Bible teacher you like so much, your weekly Bible Study group. Whatever you’re getting right now, it is ultimately coming from one source: God. So why not collect all that training and input into one place? The Armory Journal is a centralized tool that gives us a chance to pool all the different resources that God is using to equip and grow you, so that you can begin to see how He is working deliberately in your life.